The daily case reports from the Epidemiology Unit are the only data we have to assess the spread of the virus. A better measure would be a regularly updated or “now-casted” estimate of the current effective reproduction number (Reff), but the Epidemiology Unit does not publish this, and I have no idea if they estimate it on a regular basis. If they do, then maybe the spirit of the RTI legislation should encourage them to share it.

The data we do have are not reassuring. The number of reported new cases has been flatlining since 24th October at about 450 cases/day. Under normal circumstances, this could be evidence that virus transmission is under control, neither increasing nor decreasing (Reff=1 to be technical). This would not be great—we need it to be falling to suppress the outbreak—but at least things would not be getting worse.

Unfortunately, this is probably not the case for four reasons.

First, our PCR testing has also flatlined at about 10,000 tests/day since 24th October. Our current maximum capacity appears to be around 12,000 tests/day, but that requires immense efforts by our lab staff and is probably not sustainable on a regular basis with current procedures. So our test numbers are probably flatlining because that’s the maximum we can do. So the most likely explanation for the flatlining in new case detections is simply that our current testing has reached the limits of how many new cases it can detect each day.

Second, if this was a typical outbreak, we should be seeing daily case numbers increasing until such time that effective control measures begin to slow transmission enough for them to peak and then fall. Typically, this peak in case detections occurs a week to two weeks after the control measures take effect, since there is a delay before slowing transmission is reflected in detected cases. But this has not happened.

Third, if the initial outbreak had been effectively contained by rapid isolation of most infected people and their contacts, then we could have seen some flatlining due to a steady stream of cases being detected in people in quarantine/isolation. But this seems unlikely given numerous media reports of new case detections outside the population of known cases and contacts. I realize that MOH continues to report that all cases are linked to the existing cluster, but I assume that in most of these cases, the detection is made in the community and the linkage is only made afterwards.

Fourth, the ratio of tests to new cases (TCR) has decreased from 200 before September to around 22 today. The global experience is that when the rate reaches this level, many or most cases are not actually being detected. And it may be worse than this, since the Colombo Municipal Council Chief Medical Officer reported today that 30% of people who were randomly tested in some parts of Colombo are positive.

The unavoidable conclusion is that current control measures are not enough to suppress this outbreak.

My best guess is that we are now seeing an ever smaller tip of the iceberg. Hundreds more are being infected each day undetected, and daily new infections may well be increasing. If this is the case, the unavoidable conclusion is that current control measures are not enough to suppress this outbreak.

Testing, tracing and isolation remains the most effective control measure we have to control the virus—better than face-masks and lockdowns. As you can see in this chart, during the first wave of the pandemic, countries that were able to reduce their effective reproduction number below 1 (what you need to slow transmission) for sustained periods were typically testing at rates of 100+ tests to each new case. With current testing arrangements and with the current rate of viral transmission, this is not achievable in Sri Lanka. 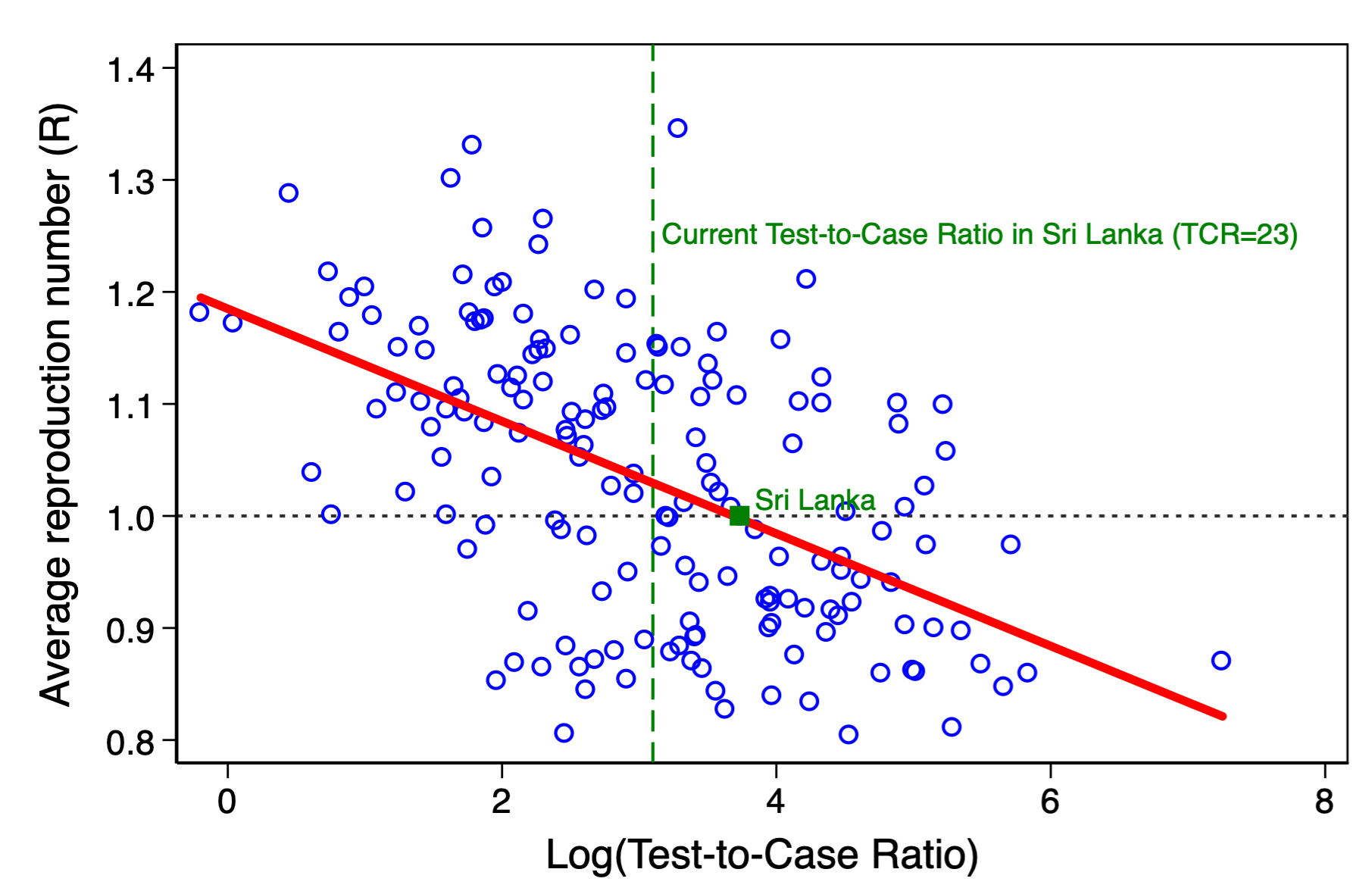 Source: Analysis of data from Johns Hopkins COVID-19 data repository and IHP COVID-19 Testing Database. Note: Analysis is for first pandemic wave from March to mid-June. Bottom axis shows the logged Test-to-Case Ratio (TCR). Green square symbol is for Sri Lanka during March-June. Dashed green line indicates the current TCR in Sri Lanka, which is about 23 or 3.1 if expressed in log terms. A TCR of 100 is 4.6 when logged.

This implies that unless drastic emergency measures are taken to ramp up testing and to further reduce spread using other interventions, the current outbreak is only going to get worse. Unfortunately, the longer that continues, the worse the problem will become, and the longer and harder it will be to get transmission back to zero.