As we as a nation and the government grope for answers on how to best tackle our second COVID-19 wave, there is no global consensus amongst experts or even amongst countries as to what are the most effective interventions or even what the goal is.

Most countries have pursued the goal of minimizing the epidemic enough so as to live with it. Encapsulated by the phrase “flattening the curve”, which was coined by the US CDC, this approach comes out of traditional public health thinking about how to manage the next influenza pandemic. I will call this the Western approach, since much of its scientific basis lies in the work of the CDC and in a highly influential paper by Imperial College London scientists in March 2020. The British researchers argued that there was no alternative but to use lockdowns to suppress the virus, whilst taking other measures such as home isolation of cases and social distancing to slow the virus. Not just one lockdown, but repeated lockdowns for years until a vaccine or other solution was found. Whilst the basic argument was widely accepted, it framed the choice as being between health and the economy, provoking continuing fierce debate, particularly in countries such as USA, UK and Brazil, as to whether the assumed economic damage of lockdowns justifies the health benefits. This Western approach has also tended to be the dominant view in most international agencies, including in the WHO, many of whose technical experts were trained in Europe or North America.

In contrast, a much smaller group of countries have pursued the goal of elimination. This means achieving zero or near zero local transmission, and preventing importation of the virus through tight border controls. I will call this the Asia-Pacific approach, because it was mostly adopted by some Asian nations and others in the Western Pacific, such as Australia and New Zealand. This approach is based on the early success of China in defeating its COVID-19 epidemic, but not so much on what happened in Wuhan, but on what the other Chinese provinces did. As Chinese experts advised Sri Lanka in March, the USA and anyone else who was listening, the core of this approach is not lockdowns, but instead intensive PCR testing to detect and then isolate infectious cases, combined with face-masks and social distancing.

Contrary to anti-Chinese conspiracy theories, many of them pushed by Western leaders and conservative groups prone to racism, China has been fairly open about its experience tackling COVID-19 after some serious initial missteps. So in February and March, experts and governments around the world looked at China looking for potential lessons on how to tackle the virus. However, they interpreted the Chinese experience in quite different ways.

Initially, observers in influential Western nations, in particular the UK and the USA, dismissed the Wuhan lockdown as being something only an Asian despot would do and face-masks as being culturally alien, but they soon embraced both as the virus spread rapidly in their own countries. However, they never took seriously the other important message from China: that aggressive PCR testing and isolation of infectious cases was critical and could eliminate the virus. For example, we now know that as early as 13th March 2020, British scientific and government experts knew that China was succeeding in eliminating the virus, but they dismissed it as being irrelevant. They assumed—wrongly—that this approach would fail, and that China would suffer a second wave later in 2020. China of course never did. For me, it’s hard to avoid the conclusion that years of anti-China bashing and innate prejudice against a rising Asian nation contributed in some way to that huge error of judgment.

The only Western countries that took China’s success seriously were New Zealand and Australia, perhaps because they were far enough from Europe, and more receptive to Asian experience, not to be affected by Western groupthink. Most of the other countries that did adopt China’s approach were Asian, including almost all the predominantly Buddhist societies, such as Thailand, Cambodia, Bhutan and Vietnam.

You might think that finding out which of these two approaches is better is one of the most important questions in the world today that scientists (and economists) are tackling. But you would be wrong. Global research is dominated by Western scientists and Western research funding, and they have largely focused on evaluating the impacts of lockdowns, face-masks and other interventions, and not the impact of increased testing. In fact, as was recently reported by a study published by the Lancet, there had been zero published studies evaluating the impact of PCR testing on COVID-19 transmission as of August 2020.

Which is both a shame and particularly unfortunate for us if we want to decide between the two approaches, or if you are in the unenviable position of having to advise the President what he should do.

However, from my Sri Lankan perspective the available clues strongly favour the possibility that the Asia-Pacific approach of elimination through aggressive PCR testing is the better one. First, the evidence is increasingly showing that the economies which are recovering fastest from the pandemic are ones like China, Vietnam and New Zealand that went for elimination. The whole economy versus health choice framed by the Western approach turns out to be complete nonsense—the best economic policy is elimination. The second clue is the surprising lack of scientific evidence to show that lockdowns or face-masks have made much of a difference in slowing the global spread of COVID-19. I am not going to delve into that research here, but in the spirit of Jathika Chintanaya I share our own Sri Lankan scientific analysis. My thanks here to my colleagues at the Institute for Health Policy (IHP) who did incredible work to pull this together.

CHART 1 uses Google data that tracks how lockdowns changed the time that people spent at work. The more intense the lockdown the greater the reduction in time spent at work and further to the left the place lies in the chart. As you can see, there is almost no relationship (adj. R2=0.0) between this measure of lockdown and COVID-19 control. If anything the data suggest that lockdowns were more severe in places with worse control of COVID-19.

CHART 2 looks at the association between COVID-19 transmission and the percentage of the population that wore face-masks in public spaces. Again there is no evidence of a relationship (adj. R2=0.0).

CHART 2: Association between Face-mask use and covid-19 transmission 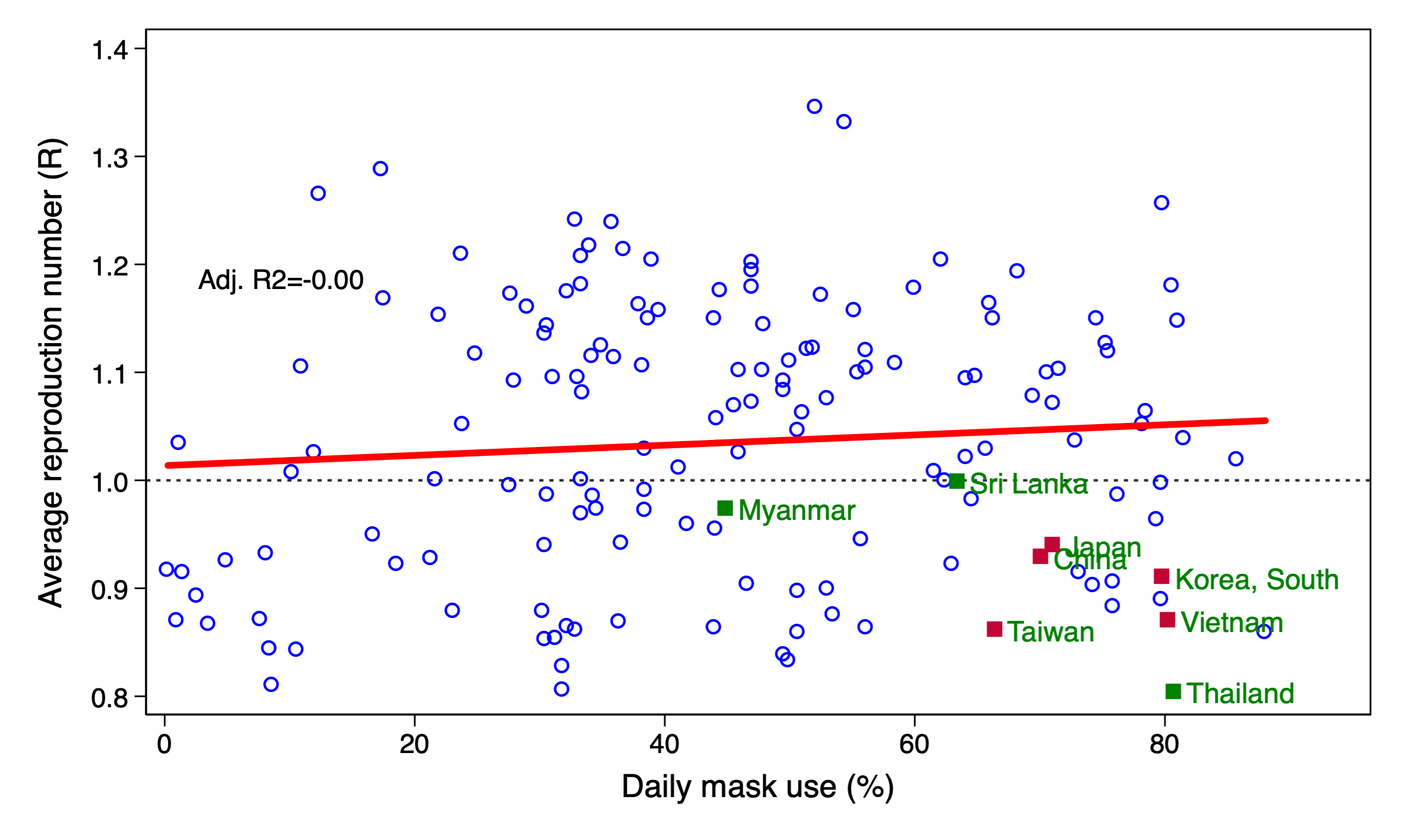 CHART 3 is the only one that shows anything meaningful. It shows the association between the logged ratio of PCR tests to cases, a measure of testing intensity, and COVID-19 transmission. As is apparent, the greater the intensity of PCR testing the better the country controlled COVID-19 (adj. R2=0.27). In fact, none of the locations that tested at the very highest levels failed to control COVID-19. 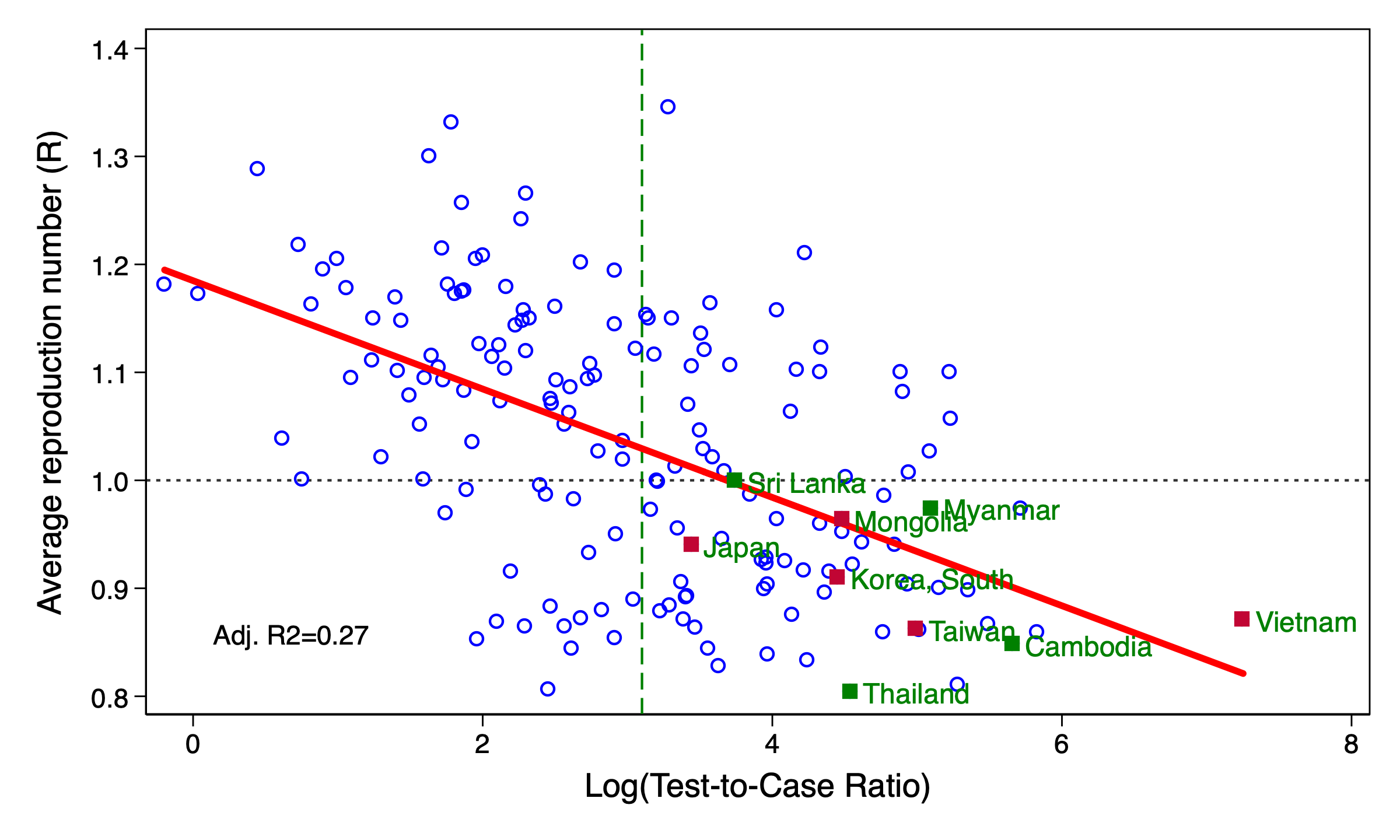 When I was doing these charts I was planning to only show Sri Lanka separately, but then I noticed that the control measures in the predominantly Buddhist societies systematically differed from the rest of the world, so I marked them too. Green to indicate the ones where Theravada Buddhism is dominant, and crimson the others.

Two things strike me. First, the predominantly Buddhist societies, with one exception, did not follow the Western approach to COVID-19 control. Instead they went for aggressive PCR testing and face-mask use, whilst going easy on lockdowns. Second, with one exception, they all effectively controlled COVID-19 enough to put them on the road to elimination.

That one exception is us — Sri Lanka. We followed most of the world in their uncritical adoption of the Western approach, and rejected the approach of aggressive PCR testing advised by independent Sri Lankan experts and followed by other Buddhist and Asia-Pacific nations.

I used to think Jathika Chintanaya was all about rejecting Western thinking and relying on our own thinking and the innate wisdom from a shared Buddhist heritage—one that that we also share with many nations in South-East and East Asia. Stupid me.

It’s not that Sri Lankan scientists and experts did not look at the global evidence in March and come to the same conclusions that Thailand, Cambodia, Vietnam and New Zealand did. Many of us did, and the largest group of Sri Lankan doctors—the GMOA—also did. But in the face of the most important challenge to face the nation since the defeat of terrorism (another battle that the West continues to fight), our authorities only aped and continue to double-down on a Western approach that does not work.

Whether this means that the whole Jathika Chintanaya enterprise was always lacking in intellectual substance, or whether our leaders ignored it, I do not know. Only time will tell if we will change course to set our own path based on facts and reality, and adopt the cat that catches the mice, to paraphrase another Asian leader who did transform his country.