Once again, emphatic declarations are being made that there is zero risk of new COVID-19 clusters, just as earlier there were declarations that we had defeated COVID-19. I don’t have such confidence, because I see no evidence that the errors that allowed the current outbreaks to happen have been rectified.

It’s not that I believe it is impossible to avoid large outbreaks. Far from it. President Rajapaksa is absolutely right in his vision of “proactive intervention to prevent any outbreak of COVID-19 within Sri Lanka”. This is certainly doable.There is a small group of territories that crushed their first wave, and which have not suffered large second waves. T2020-11-30 Daily Mirror We can’t prevent new outbreakshese include both poorer countries like Vietnam and Cambodia, and richer economies like Thailand, New Zealand and the separate Australian states excluding Victoria. I should be honest. These places haven’t been completely free of COVID-19. Almost all of them have experienced outbreaks in recent months, but these outbreaks have been kept small, typically to less than a hundred cases, and in almost cases these have been stopped within days and at most six weeks.

The problem is that the approach that our authorities took after April to achieve the President’s vision was not adequate to prevent the current outbreak. It clearly failed, and the proof is in the numbers — over one hundred lives lost and 20 thousand Sri Lankans infected by the virus since the end of September.

So what happened? What did we do differently to those other countries that succeeded in preventing large outbreaks of COVID-19? How did they avoid a large second wave?

Before answering that, I should remind you how good a position we were in after April and until September. You can see this below in CHART 1, which compares the monthly rate of new COVID-19 cases in Sri Lanka with the countries that have avoided a second wave, and the rest of the world. Whilst COVID-19 infections continued to increase in the rest of the world during May to September, we had very few new cases of COVID-19, and our performance was quite comparable to the countries that later avoided a second wave.

CHART 1: Trend in incidence of new COVID-19 cases in (i) Sri Lanka, (ii) countries that avoided a second wave, and (iii) the rest of the world

CHART 2 shows what we did differently. In most countries, as the COVID-19 epidemic got worse, authorities were forced to increase PCR testing that is used to diagnose and detect new cases. That’s not surprising. What is more notable is that testing also continued to increase in the countries that avoided a second wave. These countries had almost no COVID-19, and yet they chose to continue ramping up testing. Between May and August, these countries increased their testing from 8 to 25 tests per 1,000 people each month, almost as fast as the rest of the world which was struggling and failing to control their COVID-19 epidemics. In contrast, in Sri Lanka, PCR testing barely budged from 2 to 3 tests per 1,000 people each month.

Their much higher rate of PCR testing was critical in allowing the successful group of countries avoid a second wave. In most of them, this increasing rate of testing allowed them to test increasing numbers of people with very minor symptoms. Not admitted ward patients which is what our flawed COVID-19 strategy focuses on, but widespread testing of members of the public with minor symptoms. This was critical because the first signs of a hidden COVID-19 cluster are usually minor coughs, colds or fever that are not serious enough to result in hospital admission. Catching an outbreak at this stage and before anyone is ill enough to be admitted is far better than catching it later when the outbreak has grown to infect hundreds of people. We saw this in both the Kandakadu and Minuwangoda-Brandix outbreaks, where the first people infected with the virus reported coughs and fevers weeks before doctors decided to test anyone for the virus. During those critical weeks, the virus continued to spread infecting more and more people, making each outbreak much bigger than would have happened in the countries that avoided large second waves.

The critical question is why did we not increase PCR testing during May to September, like those other countries who did succeed in achieving our President’s vision?

I don’t think it was poor leadership by our President and Prime Minister. Neither of them is a public health expert or epidemiologist. Yet both of them heard the voices of many medical experts in the country who since April have been urging the health authorities to increase testing, and they both publicly at various times instructed the health authorities to increase PCR testing to 3,000–5,000 tests a day. But this never happened. Testing remained around 1,000–2,000 tests a day until September.

A lack of money and people to increase testing is not the explanation either. To claim that is nothing but a sham. First, the World Bank gave us USD 128 million back in April to spend on COVID-19, and we could have and still can invest these funds in PCR capacity. Second, we are not a poor developing country anymore. In terms of relative income levels, we are richer than most lower-middle income countries, and almost rich enough to qualify for upper-middle income status (we did briefly in 2019). Yet, during May–August, both lower-middle and upper-middle income countries were able to substantially increase testing, whilst our testing rates stagnated and fell towards the level of the poorest countries in the world (CHART 3).

The explanation for this lies in the thinking and choices made by the health authorities. Other than complacency, I think there are two reasons.

The first is that our doctors are trained to save money, and so there is a natural bias against too much laboratory testing. In normal times, this is a good thing, but with COVID-19 it is not. The wider economic costs of failures to prevent large outbreaks far outweigh the costs to the health budget of maintaining high testing levels. If the doctors were not willing to accept this, then they should have been over-ruled.

Second, I think our health authorities and doctors trusted too much the guidance of the WHO, medical specialists, and of outside experts, such as Professor Malik Peiris, who told us that testing was adequate. They failed to take seriously the successes in the rest of Asia, and they failed to listen to other Sri Lankan and Chinese experts, including Dr Kamalini Lokuge [1], a Sri Lankan-Australian expert in Australia, and the GMOA who argued that much more testing was needed to avoid a second wave.

The countries that did avoid a second wave did not follow the WHO guidance on testing. For this reason, it worries me that senior officials continue to say that our policy is fine because we follow WHO instructions. During April and May, the WHO made various recommendations on testing which suggested that doing ten to thirty tests for every new confirmed case was adequate. To be fair, the WHO admitted that these were basically guesses and not based on any solid analysis, which should have raised a red flag. Our own research in Sri Lanka indicated that this was not enough, and the countries that avoided a second wave did far more testing than this. As shown in CHART 4, these countries on average increased their testing effort from 400 tests for every new case in April to over 6,000 in August. We would have matched them if our health authorities had actually implemented the government’s directions to increase testing, and if we had spent those months ordering and installing the PCR testing machines that we now need. 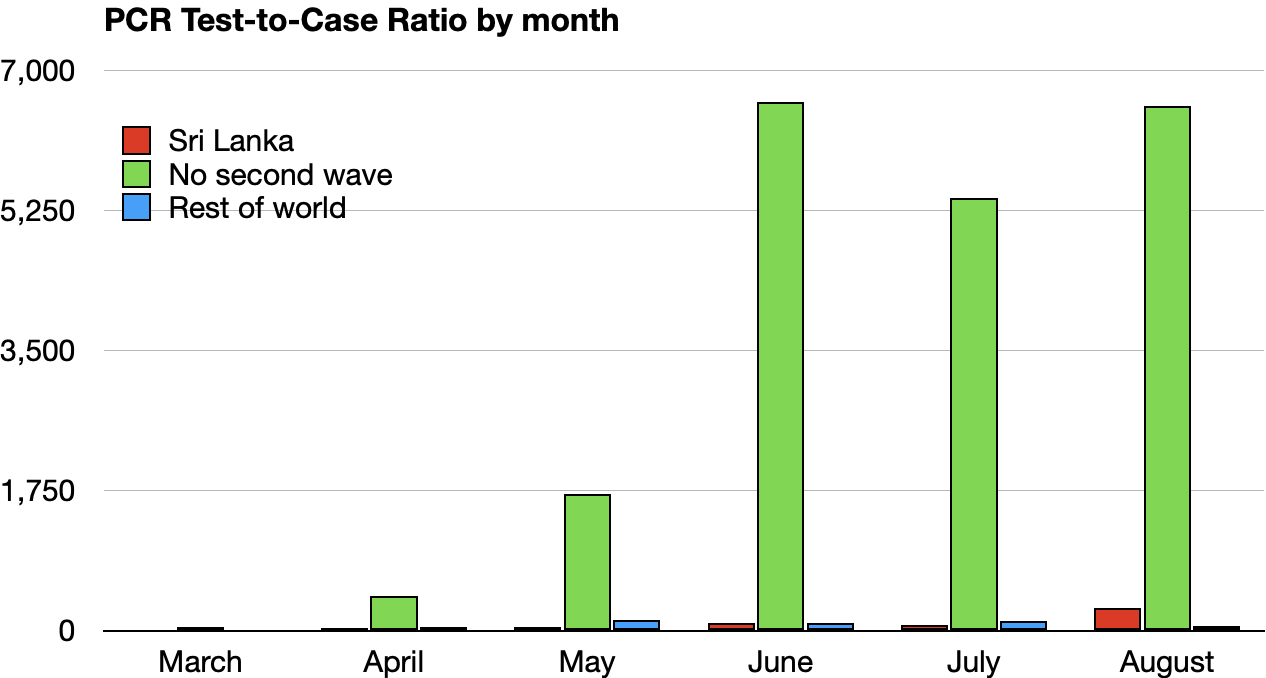 Today, we are fighting our second wave of COVID-19 half blind and with one hand tied behind our back. Our PCR testing capacity is stretched to capacity and unable to do all the tests that we need to rapidly bring this outbreak under control. Or as Prof Malik Peiris admitted diplomatically the other day, “testing is a big bottleneck”. With new infections probably running at over a thousand a day, we ideally need large, automated machines that can each do over 5,000 PCR tests a day. These are our best option if we want to equip our overworked labs to substantially increase testing. But the problem is that there is huge global demand for PCR testing machines, and the delivery times for the larger, automated machines are typically several months and stretching well into 2021. And after January 2021, delivery times will increase even more, since the incoming US administration is signaling that their first priority is to ramp up testing in the USA.

None of this would matter if those in charge of our health response had placed orders for these machines back in April, May or June. But they didn’t, and depressingly there is no sign that the health authorities have changed their attitude to PCR testing or are seeking fresh advice. They continue to dilly-dally over placing orders for the new machines that we need and taking steps to ramp up PCR testing.

Until they do, I will continue to have little confidence that the health sector will achieve what President Rajapaksa has asked it to do and what the nation expects.

*This is a repost with minor edits of my article that appeared in the Daily Mirror on 30th November 2020.