Ever since the key numbers for the Covid-19 virus became clear in mid-February, it was obvious that all countries would end up trying to control its spread. The alternative of letting the virus rampage unchecked through a country would always end up being too awful for any government, however stubborn or stupid, to accept.

Unfortunately, there is a lot of confusion about the various strategies that countries could adopt, with a whole new lexicon of terms being thrown around in the media and by experts, and often used inconsistently. Welcome to our new world of “flattening the curve”, “hammer and dance”, mitigation, elimination, suppression … and the list goes on. But ultimately, all these strategies boil down to just two – ”Mitigation” and “Elimination”, and which of these countries choose is often a matter of how much short term pain they are willing to suffer for longterm benefits.

Mitigation aims to reduce the virus to a level that does not overwhelm a critical part of the system. A common concern is with how many ICU beds a country has, but it could also be how much contact tracing or testing capacity a country has. Mitigation tolerates continuous spread of the virus, but the goal is to avoid case numbers ever peaking above the level that the system cannot cope with. For this reason, it’s also called “flattening the curve”. Most countries have adopted this approach, including the USA, UK and Europe.

To implement mitigation, a country first has to slow down the spread of the virus and get new cases numbers coming down. Then, when it assesses numbers are manageable, it can gradually relax restrictions it has imposed to open up the economy, whilst still living with significant numbers of new COVID cases each day. In practice, this would not be the end of it. These countries would still need periodically to tighten restrictions whenever case numbers start to rise, to get them down again to a manageable level. It’s been estimated that this on-off-on approach might still leave most Western economies under lockdown for significant periods of time. but it would allow them to open up their economies faster.

Elimination aims to stop significant, sustained transmission of virus inside the country altogether. It is sometimes also called “suppression” and happens to be the core of  what has been called “hammer and dance”—an approach the GMOA has pushed but was rationalized by a Silicon Valley based data analyst Tomás Pueyo.

Elimination does not mean zero cases. First, countries will continue to have cases in foreign arrivals. As long as these people don’t infect anyone locally, this is not a concern. Second, they will likely have a very low level of continuing local spread because of hidden cases. The best example of this is China. Despite going many days with zero local cases, China continues to report sporadic local cases, typically just one or two every few days. This happens because many COVID infections are never detected, so zero reported cases for two or even four weeks does not guarantee zero virus inside a country. In an elimination strategy, the goal is to keep these local cases as close to zero as possible, say one or two a week or month, and to have sufficient controls in place to prevent these numbers increasing. China, Taiwan and New Zealand are aiming at this outcome.

To implement elimination, a country needs to make a huge initial effort to get cases of local infection down to zero or near zero, and then it needs to have continuing measures in place to slow down spread of the virus between people sufficiently that numbers of new cases remain flat and sporadic. To use technical jargon, this means reducing the effective reproduction number (Reff) substantially below 1.0 to get to (near) zero cases, and then maintaining Reff at or below 1.0 to keep numbers from rising again.

Why aren’t countries going for elimination?

Although China had proved by late March that COVID elimination is possible, most countries are not aiming for elimination. One reason is that they believe that the short-term pain of getting cases down to near zero is not worth it. They believe that it’s better to live with a simmering epidemic and keep businesses open than shut everything down. In China, getting to zero involved locking down Hubei province with 60 million people for three months and significant controls in the rest of the country. Even then, three months was probably not long enough for Hubei, as China reported a new cluster of cases there in the past few days. Another reason is that countries think that it is not realistic to do what China did.

I think that the belief that the costs for businesses and the economy are less with mitigation than with elimination is plain wrong, but I won’t get into that today beyond noting that the only major economy that is likely to escape recession this year is China. Instead I want to focus on whether it is feasible for other countries to replicate China’s elimination success. One way to answer this is to ask: “Are there any countries, other than China, that have been able to reduce case numbers fast enough to put them on a path to near zero cases as required for elimination?” This is particularly relevant since many, including here in Sri Lanka, still dismiss elimination as unrealistic. Also, there may be things that we can learn from any successes.

Are any countries other than China achieving elimination?

Of course, the media, pundits and others frequently highlight various countries as being COVID stars, including Sri Lanka. Unfortunately, these claims often reflect prejudices about what works, a desire to push particular countries, or are not based on hard evidence. For example, some people, including the WHO, tout Sweden as a country that is managing COVID well, but they ignore its death rate, one of the highest in the world.

To answer this question without letting our own biases get in the way, we need to let the data speak. So what I and my colleagues at IHP did was to take the global data and look for any countries which have been able by end-April:

We focus on percentage reduction and not the reduction in case numbers, because this is a much better indication of how well a country’s efforts are controlling virus transmission (see Box). We also ignored countries with fewer than 100 cases in total by end-April, as it is difficult to assess the trend when numbers are small.

BOX: Why we need to look at the percentage reduction in cases and not the actual numbers
The nature of COVID transmission is that it spreads exponentially. If for example, each new COVID case infects two other people every six days (in technical jargon: Reff=2.0), the number of new infections doubles every six days. So if we start with just one case, after six days there will be two, after 12 days four, and after a month 32 new cases. 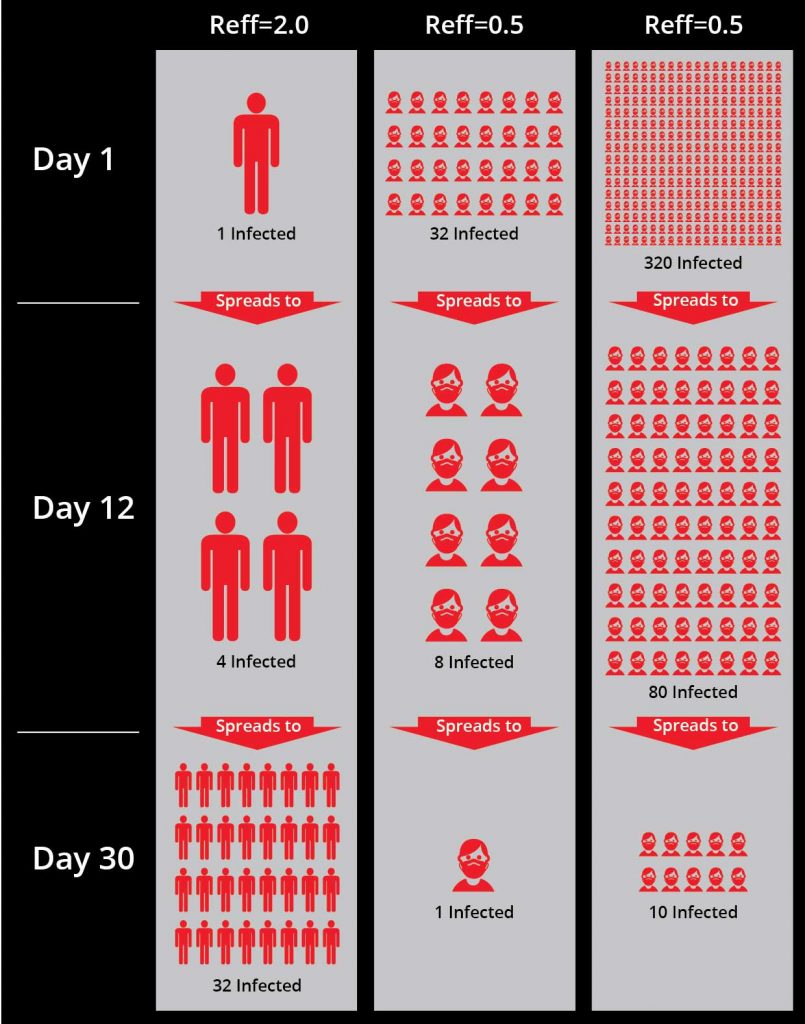 Whilst the law of exponential numbers helps COVID spread rapidly, it also works in our favour if we can reduce virus transmission. For example, if face masks reduce the average number of new infections caused by a single case from two to a half (Reff=0.5), then if we start with 32 infections a day, we will have only one new infection a day after a month. Because this is an exponential change, it also means that if we start with a daily infection rate of 320 a day, we will end up with an infection rate of just 10 a day after the same one month.

When we analyzed the data for all 141 territories (I will call them countries for ease of reference), which had reported more than 100 cases by end-April, we found 14 which met our criteria. These countries were able to reduce the number of new cases by 95% between March and April, and at their rate of reduction, all of them would achieve close to zero cases within another month, if they hadn’t already done so. These COVID super-performers consist of six high income countries in the Asia-Pacific region: Australia, Brunei, Hong Kong, Korea, New Zealand and Taiwan; three other high income countries: Faroe Islands, Iceland and Trinidad and Tobago; and five developing countries: Cambodia, China, Mauritius, Montenegro and Vietnam.

CHART 1: Change in trend of new cases during March-April in Elimination superstars and Sri Lanka (% of peak numbers in March) 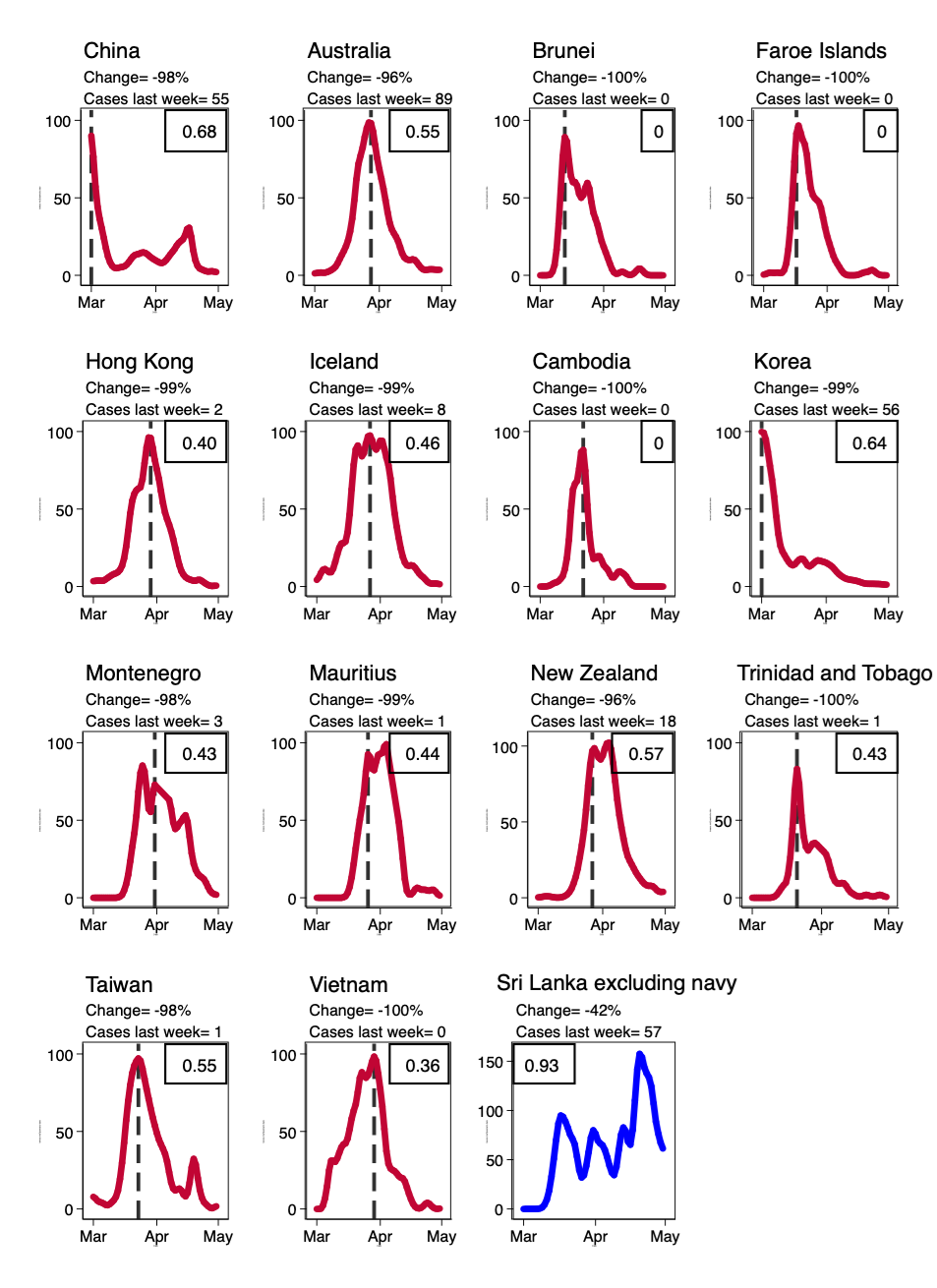 Notes: Change refers to percentage change in case trend from March peak to 30 April. Number in box within each plot is the crude reproductive number for the period from the Mark peak to 30 April: a lower number implies faster reduction in cases.
Source: Analysis by Ravi Rannan-Eliya, Nilmini Wijemunige and Nishani Gunawardana (IHP) of data from Johns Hopkins University (https://github.com/CSSEGISandData/COVID-19).

Incidentally as shown in Chart 1, Sri Lanka did not make it into this group, but not because of the navy cluster. If we exclude the navy cases, we still had a much higher number of cases involving arrivals infecting others than seems to have been the case in the other countries in the list, and so our case trend was not sufficiently reduced by end-April to qualify.

Now I should emphasize that I don’t have any idea what Montenegro has done, and I have some suspicions about the data from Cambodia. But based purely on looking at the data, these fourteen are the countries that we should be looking more closely at. In Chart 2 below you can see how different the course of the COVID epidemic has been in this group of countries compared with the rest of the world. The chart also shows that whilst Sri Lanka has done better than the average country, it did not do as well as the COVID super-performers. Whilst COVID numbers continue to rise in the rest of the world, these COVID stars largely crushed the epidemic before May Day. With the exception of Korea, all of them did this in less than six weeks. They clearly demonstrate that elimination is possible within a very short time outside China.

CHART 2:  Change in trend of new cases during March-April in Elimination superstars, rest of the world and Sri Lanka (% of peak numbers in March) 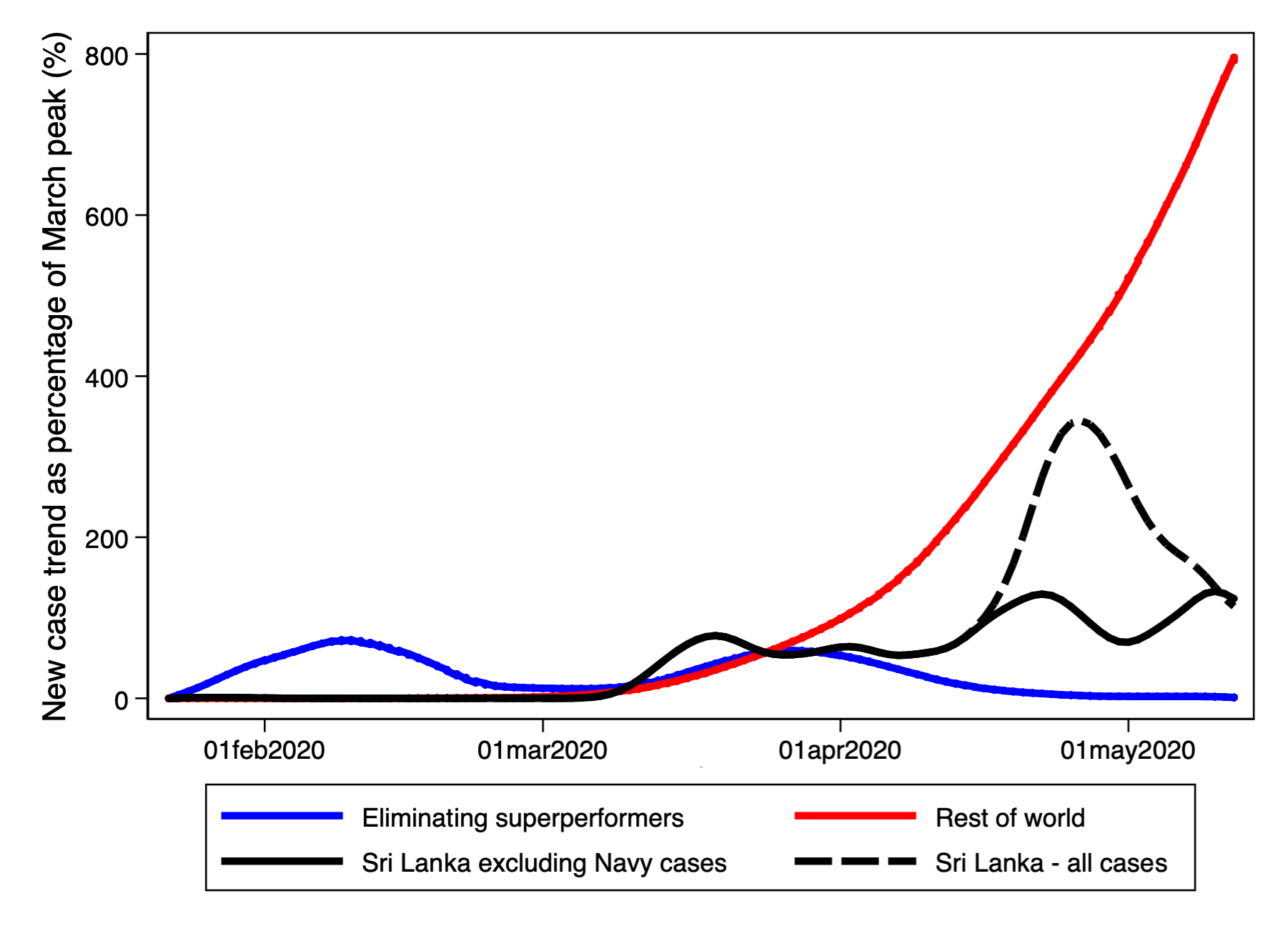 What these countries also show is that eliminating COVID is possible in a wide range of settings. Although many are high income countries, Cambodia and Vietnam are poorer than Sri Lanka, and they range in size from some of the smallest countries in the world to China, the largest. They are also located in all parts of the world from the tropics to near the Arctic, and range from communist one party states to Western democracies. This suggests that what makes them different is probably something to do with how they managed COVID. But what exactly this is is not immediately clear, since they don’t appear to have adopted the same policies. For example many of them—Hong Kong, Taiwan, Iceland and Vietnam—have not imposed national lockdowns, but most do appear to have done far more COVID testing than Sri Lanka has. However, without digging deeper it is not possible to draw conclusions about what really made a difference, and I leave this for a follow up post on some further analysis we have done.

* This is an edited and updated version of the article originally published by the Daily Mirror on 15 May 2020. My thanks also to Nilmini Wijemunige and Nishani Gunawardana of IHP who helped obtain, process and analyze the data.

Updates
15 May 2020: (i) Date when China’s elimination success became clear revised back to March; (ii) WHO noted as having praised the Swedish model; (iii) Chart 1 replaced by version with more detailed captions including estimate of equivalent Reff.
16 May 2020: Added new graphic to box to illustrate impact of varying Reffs on transmission and edited numbers in text to fit. Thanks also to Harees Hashim for the design of the graphic.