The surge in cases due to spread between residents of Colombo under curfew should not surprise the health authorities – it was entirely predictable. For several weeks, we have failed to take adequate action to build on our initial success, in particular to expand testing. Whilst we remain in a select group of countries with minimal community transmission, we are increasingly dropping behind in our response. This is making it more difficult to lift the lockdowns, it will continue to frustrate the government’s economic and political goals of restarting the economy and holding elections, and it is putting to waste the enormous sacrifices that the public have made during one month of lockdown.

(1) Countries that aim to flatten the curve

Most countries today are in the first group. Community or local transmission of virus is so widespread that it is impossible for health services to track each case, with thousands of deaths and new cases every day. These countries have no hope of stopping the epidemic locally, and the best they can aim at is to bring the rate of new infections down to a level that does not overwhelm their health services and which allows them to lift lockdowns, i.e., “flatten the curve”. Countries include the USA, the UK and continental Europe, India and Indonesia.

(2) Countries that aim at elimination

The second group contains only a handful of countries, many of them islands. All of them crushed the first global wave of infection from China, and then have made significant progress in crushing the second global wave of infection, which was mostly spread by travelers from Europe. In these countries, the goal is to stop sustained local transmission and to prevent a third wave by the virus again crossing their borders. In places like China, Hong Kong, Taiwan, Korea, Vietnam, New Zealand and the Faroe Islands this goal is often explicit, and in Australia where it is not, elimination remains an option. In this second group, the epidemic has two features. First, in all of them numbers of new cases have declined to small numbers close to zero in the past few weeks. The second is that most or all of their recent Covid-19 cases are in travelers or their immediate contacts.

The difference between these two groups is quite obvious when we look at the rising or flat trend in new cases in places like Brazil, India and Sweden compared with say the declines to almost zero in New Zealand, Taiwan and the Faroe Islands (Chart 1).

Chart 1: Trend in new cases in countries aiming for control versus elimination 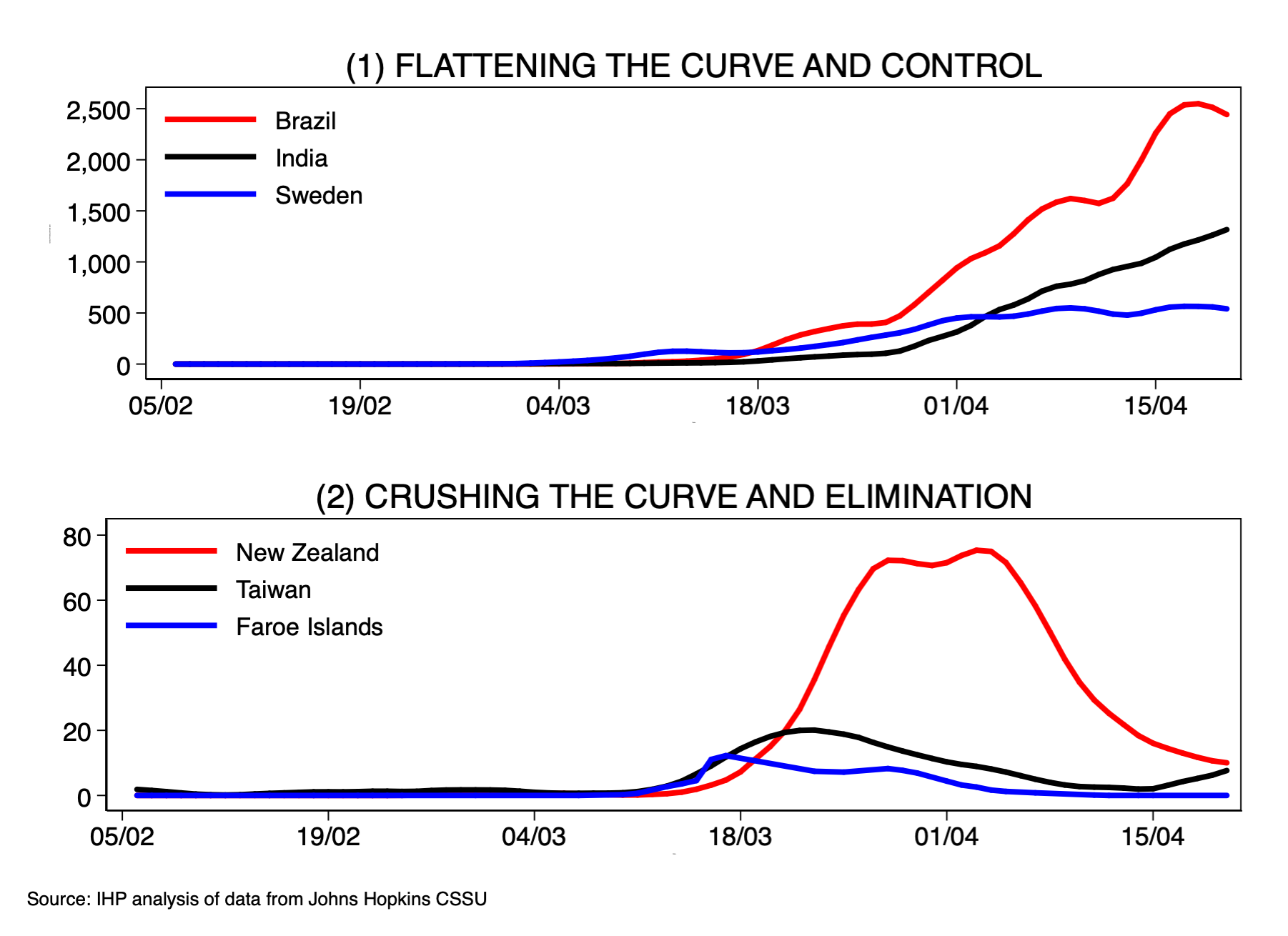 Sri Lanka fits in the second group so far, but complacency is leading us to fall behind.

The first sign of this came in early April. After stopping foreign arrivals in March, we did not crush the second wave as rapidly as the others. Instead, the decline in new cases was less rapid, and then it was not sustained with numbers fluctuating from day to day, as shown by the red wriggly worm in Chart 2. This performance is particularly poor when we consider that places like Hong Kong, Australia, New Zealand and Taiwan not only closed their airports after us, but they also let in far more infected travelers during March than we did. As a result, they had far more imported cases in their second wave than us and their numbers peaked much later, but despite this they then brought their numbers down much faster. 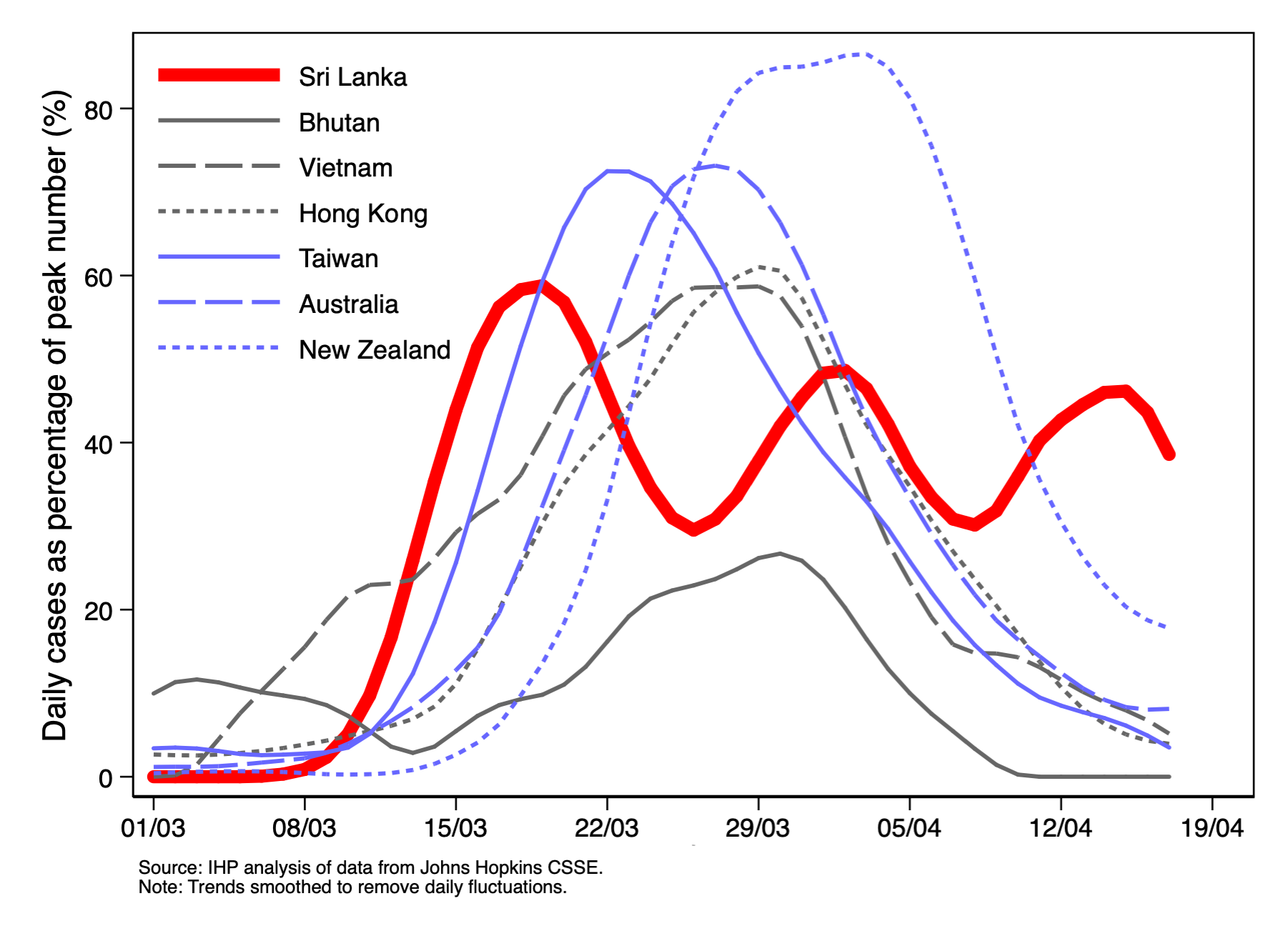 The second indication of a problem comes from looking at how recent cases were infected. This is not that easy to do. We have a fundamental right to this information held by the government on our behalf, but our public servants in the health ministry still do not routinely share these data which are of such public interest and importance.

To compile our analysis, we used the last detailed report (27 March) by the Ministry of Health (MOH), combining it with what we could obtain from media reporting of subsequent cases. Chart 3 below shows the source of infection in cases in Sri Lanka by day from mid-January till the start of the current outbreak (20 April). Blue indicates an arrival who was infected outside Sri Lanka or people who were directly infected by them (light blue). Red and orange indicate people who were infected not by the imported case but were infected through a chain of transmission starting with the direct contacts of an imported case. MOH does not treat these cases as community transmission, but they all involve local transmission in Sri Lanka.

Our first wave in late February consisted of only one blue case in a Chinese visitor. It’s small not because our COVID response was exceptional, but because only a tiny proportion of Chinese tourist and business traffic is to Sri Lanka—Chinese prefer to go to Europe, USA or other Asian countries much more than come here. Paradoxically, our economic failure—to globalize like other Asian economies—protected us, but I suspect that the absence of cases in February then resulted in too much complacency.

The second wave starting in March is much bigger. Initially we had a peak of cases which were mostly blue. Case numbers then came down but did not continue declining. Instead, we see a resurgence of mostly red cases due to local transmission, indicating that we were failing to contain the virus to arrivals and their immediate contacts.

Contrast this pattern with one published by Hong Kong (Chart 4), which closed its airport to foreign arrivals a few days after us. Note that this only groups the immediate contacts with imported cases (in blue), and treats other cases where the transmission chain was longer as local infections. It shows only a single blue wave of cases in late March. This peaks around 30 foreign arrivals a day in mid-March before dropping to essentially zero in mid-April. Hong Kong has since seen several days with zero cases, and its most recent cases are all in arrivals who are in quarantine.

Sri Lanka has failed to contain the virus to foreign arrivals

Hong Kong’s performance is similar to China, Taiwan and others in the elimination group. Sri Lanka differs from these other countries, because it has failed to contain the virus to foreign arrivals and their immediate contacts. Instead it has allowed the virus to jump to others, resulting in chains of transmission continuing into late April.

Why have we failed to contain the virus?

If we examine the recent cases, we can see several problems which have contributed to the failure to contain the virus.

Self isolation or home quarantine of arrivals does not work. The Piliyandala fish vendor was infected by an arrival who was home quarantined in the same house. It is difficult for self isolation to work when people live in cramped housing and other problems arise from non-compliance with the rules. Developed countries like Australia and Singapore found this is too risky, and either mandated institutional quarantine (Australia) or only allow home quarantine after taking stringent measures to enforce compliance, including heavy fines for breaking the rules, electronic tagging and random daily visits and calls to check on individuals (Singapore). Although we now have mandatory quarantine for all new arrivals, given the likelihood that undetected cases may have entered earlier, we need to go back and test everyone living in a house with an arrival who was not quarantined from mid-March.

Fourteen days quarantine is not long enough to detect symptoms in infected people. We have known since February that many COVID cases never develop symptoms and others develop symptoms only after 3 weeks. The Bandaranayake Mawatha cluster was started by a returnee who only developed symptoms after completing 14 days of quarantine, and who was only diagnosed five weeks after her arrival. The only way to handle this is to combine testing with quarantine.

Infection control procedures have not been adequate at quarantine camps or at the airport. There have now been several cases of staff at these places being infected and of cross-infection between quarantine residents. More needs to be done to improve the design and operation of quarantine and airport facilities to stop this happening.

Curfew alone is not sufficient to stop community transmission. Many of the Bandaranayake residents were infected by social interactions in the middle of curfew. A family from another area was also infected by visiting and staying in a house in the area, again despite the curfew. Although enforcement of the curfew could be improved, it is not realistic to stop all interactions during curfew, especially in poor areas where families cannot sustain themselves for long periods. This suggests that we need stronger social distancing and hygiene measures combined with much more surveillance testing to slow transmission, both during a curfew and also after it.

Finally, the overall failure to adopt an aggressive testing strategy has resulted in the health services repeatedly missing chances to detect hidden cases of infection. The index case in the Bandaranayake cluster made several visits to a teaching hospital over several weeks with respiratory symptoms but was not tested. She almost certainly infected many others during this time. This is not an isolated case – this failure to detect cases has happened before. Although MOH has now allowed doctors to test OPD patients with relevant symptoms, this is not mandatory, and most are not tested in practice. Current MOH guidelines are not clear enough or do not mandate testing of many high risk groups as is done by Hong Kong, Singapore and others.

What do we need to do?

Half measures will not work and are not cost-effective with COVID. This is clearly demonstrated by the recent outbreaks and the huge failure of MOH to bring the new case count down to zero more than a month after the airport closed. To get back on track with the goal of elimination, and to ensure the country is safe to lift the lockdown, we need to fully copy the elimination strategies of Vietnam, Hong Kong, Taiwan, Australia, New Zealand and others. Incidentally, this also implies going beyond WHO recommendations which are not tailored for countries that are aiming at elimination.

First of all, this means that MOH needs to strengthen its testing guidelines to make testing mandatory for many patient groups where it is still discretionary. For example all ICU patients must be tested for COVID, and we need much more testing of patients in OPDs. In addition, quarantine and self-isolation procedures need to be tightened to prevent cross-infection and to include testing to identify any infected cases before release. As a remedial measure, all family members of arrivals in late March who underwent home quarantine should be urgently tested with PCR or antibody as appropriate.

Looking ahead, we need a better strategy for controlling transmission of the virus after lockdown is lifted. This needs to combine much more testing than now with stepped up social distancing, public education and hygiene measures. It would be foolhardy and irrational to assume that no virus will be circulating in the community. At the very minimum, we would need to have 28 days with zero new cases, but the country will not tolerate this. We can now see how many people just one or two hidden cases can infect in the space of a month under curfew. Imagine what will happen during five weeks of an election campaign.

We do not blame our political leaders for this fiasco. The failure clearly embarrasses the President and government with their plans to lift the curfew and to hold elections, and it adds to the damage the lockdowns do to our economy and people’s livelihoods. Whatever their faults, our politicians have deferred to the advice provided by our health officials. Instead, we must point to the continuing complacency and inability of these health officials to understand that half measures will not work against this virus. In particular, the failure to expand testing aggressively is nothing less than a scandal. This needs to end for the sake of the country.