Last week (10 April), Austria released findings from the first national survey of Covid-19 infection in any major country in the world. Despite the country suffering a severe epidemic, only one in a hundred Austrians appear to have been infected. The findings demolish the idea that a strategy of going for herd immunity is a viable response to Covid-19 in any sane country. They also suggest that conducting community prevalence surveys in countries like Sri Lanka will face significant challenges.

Until now, all estimates of how many people in a country are actually infected by Covid-19 have been based on the numbers of detected cases and various calculations that use those data to estimate the true number of infections. This is because the number of actual infections is bigger than the numbers who test positive. Many infected people never fall ill and so never see a doctor, and many countries are not testing enough people. Analysis of China’s epidemic has generally suggested that the true number of people who were infected is anywhere from two to five times the official number of cases.

Unfortunately, the difficulty of estimating these numbers has encouraged speculation that the underlying number of infected people could be even higher. One controversial study—based largely on assumptions and no data—from Oxford University researchers recently suggested that most of the British population might have already been infected. This matters because if the Oxford estimates are correct, they suggest that the UK is close to achieving herd immunity for Covid-19, and should not experience a large second wave of infections after the current wave ends.

The idea behind the herd immunity strategy is that it’s better to avoid the disruption of lockdowns and instead allow the virus to spread through the population, because within a few months, most of the population will be infected. At that point the spread of the virus will slow because it will find it hard to find new people to infect. The level at which this happens for Covid-19, what we call herd immunity, is more than 60% of the population.

As I have written before, this is not going to happen anywhere because the number of dead bodies that will pile up will force any government to change strategy long before they get to herd immunity. However, this idea persists because until now nobody really knew what the true number of infected people is.

To know the true number of infected people, a country has to test a large random sample of its population. Austria has now done this. During 1–6 April, researchers randomly selected 1,544 people throughout the country from those not in hospital, and tested them for active Covid-19 infection using RT-PCR. The survey appears to be of high quality, covering all ages including infants, a high participation rate (77%) by those approached, and with a decent sampling and analytical design.

The study projected that around 29,000 Austrians or 0.32% of the population were acutely infected by Covid-19 during early April [1]. This compares with 2,100 new cases and 8.500 confirmed active cases that were officially reported during the same time.

Taking into account the uncertainties arising from sampling and that the PCR test decreases in sensitivity during the course of infection, the results mean that at most only 1% of Austria’s people have been infected so far, and that the true number of cases is some two to three times the official case numbers. Reassuringly this ratio of three is very consistent with the numbers that epidemiologists have derived for China’s epidemic.

This logically means that 99% of Austrians remain uninfected, so there is little prospects of a herd immunity strategy working since even the impact of Austria’s current outbreak is considered unacceptable. In a demonstration of science-informed leadership, the Austrian chancellor, Sebastian Kurz, publicly noted that this disproved the idea of herd immunity as a viable policy option. The science minister, Heinz Fassmann, commented that the low rate of immunity meant that without continued controls there was a continued risk of an exponential spread of the virus in Austria. “The mountain is higher than expected and we are not yet on the safe side,” he said.

The Austrian survey (N=1,544) was only just able to detect enough cases to estimate the acute infection rate. My best guess is that it picked up less than ten positives (technical report is not yet published). This is is too low to make anything more than a national point estimate.

Austria’s epidemic is actually worse than the one in Hubei, China. Reported infection rates (based on confirmed cases) in Austria and most of Europe have surpassed Hubei, and are now more than one hundred times greater than in Sri Lanka (see chart below). This suggests that any similar national survey of infection in Sri Lanka is unlikely to be useful without sample sizes much larger than the Austrian survey, which would be extremely costly using RT-PCR. 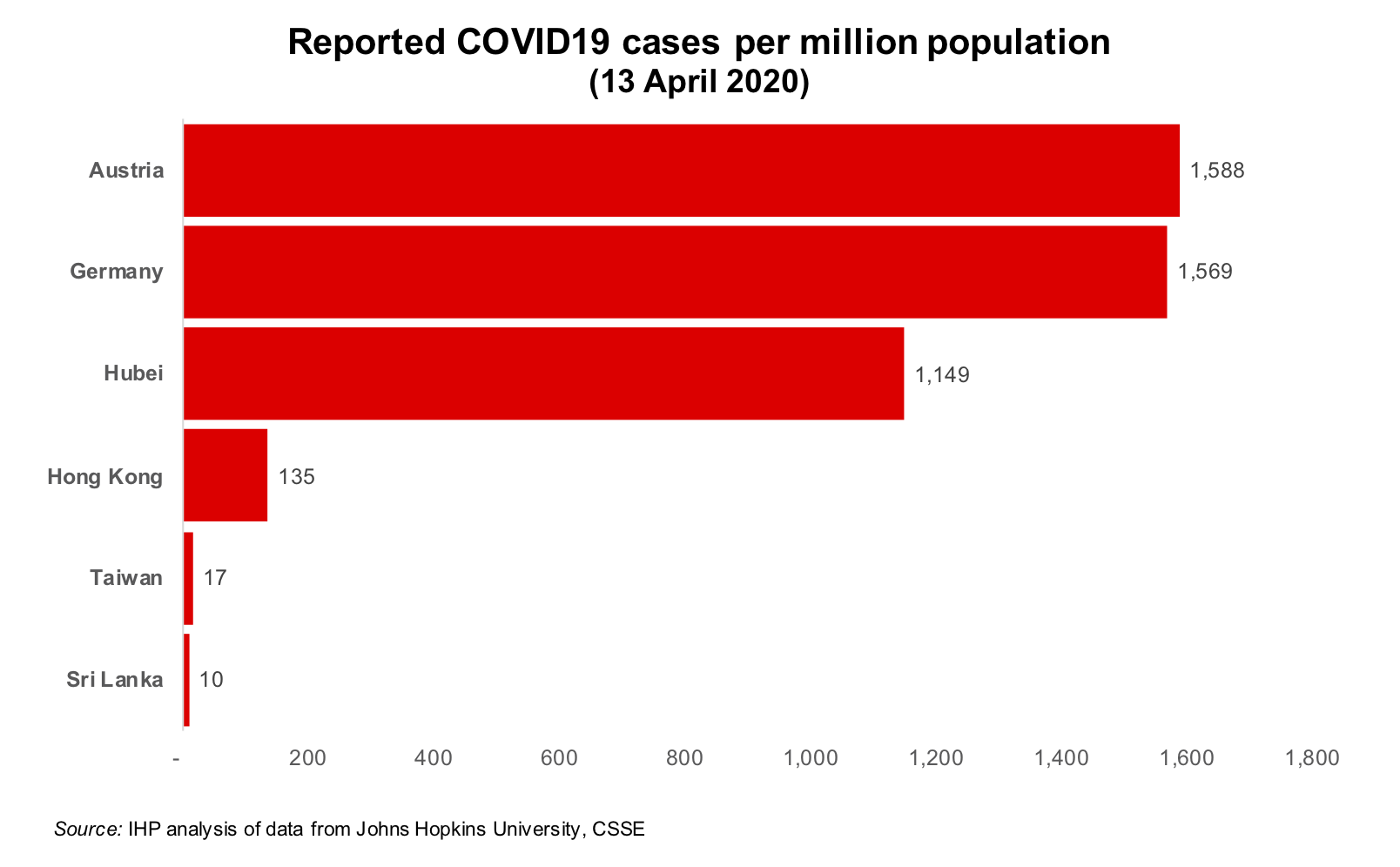 A possible alternative is to use antibody tests, which are much cheaper and faster than RT-PCR testing. However, the quality of current antibody test kits is highly variable, and many are well … just crap, to paraphrase the technical assessment of the US Association of Public Health Laboratories. Unfortunately, this is relevant for us, as evaluation of several test kits here in Sri Lanka has come to similar conclusions.

Antibody tests detect past infections and potential immunity, as well as the late stage of active infections. Preliminary findings from a recent community survey of a German district [2], which was the location of one of the earliest outbreaks in Europe, reported a ratio of 7 antibody positives to 1 PCR positive. Generalizing from this, a Sri Lankan survey using antibody tests would still need to be 10–20 times larger than the Austrian survey to detect significant numbers. Germany has launched exactly this kind of national survey using antibody tests, but its sample size is notably 100,000 tests/week, which is not an option for us.

This means that for now, antibody prevalence surveys in Sri Lanka will be useful only in very specific scenarios where there is likely to be a very high rate of infection, and only if we can guarantee the quality of the test kits. The scenarios include monitoring healthcare workers and in contact tracing amongst contacts of known cases where the infection exposure was more than two weeks ago. The last is what Singapore is using these tests for.

Revisions
15 April 2020: Updated to make the quality problems of antibody test kits more explicit, and adding a reference to comments by US lab experts.