The current lock-down – not only here but affecting two billion people around the world – should make it clear to everyone how serious COVID-19 is. What many still do not appreciate is that closing our ports and even a one month lockdown will not make the problem go away.

Let me be clear first about the good news – we appear on track to control the current surge in cases. So far almost all cases are linked to Sri Lankans returning from foreign travel, and there is little transmission between people in Sri Lanka.

When we get through this lockdown, life will not return to normal for at least the next 12 months. Our political leaders need to explain this, to prepare everyone for a long slog. To adapt the words of Winston Churchill at a similar moment: Defeating the current surge would not be the end. It would not even be the beginning of the end. But it might be, perhaps, the end of the beginning. In the absence of any effort to trust the public with what the long term strategy is, I provide an expert assessment of prospects.

Its high infectivity and the lack of any previous exposure and immunity to it means that if nobody changed their behaviour (which is no longer true), COVID-19 would infect 90% of the world’s population and kill 40 million this year. The most recent predictions for the UK and the US are over two million dead by next year.

These features make COVID-19 spread in two distinct phases in any country. It has also caused so far two global waves of infection, with more to follow.

Two phases in spread of COVID-19

If case numbers remain small, say less than 100, a country can control the outbreak by systematic efforts to test and identify infected people and trace the people they have been in contact with, so they can be tested and isolated. This is the testing-and-tracing phase. A few places, like Singapore, Hong Kong and Taiwan, and also most Chinese provinces outside Hubei, have succeeded in keeping the epidemic in this phase in this way. They have generally avoided complete lock-downs, and emphasised changing behaviour and other social distancing measures, although not always closing schools.

Note: The bars are the number of new confirmed cases each day till mid-March. The black line is the trend, smoothing out day-to-day fluctuations in reported case numbers. Analysis by IHP using data from Johns Hopkins University.

If testing and tracing are not done early and aggressively enough, the epidemic enters a second explosive phase with rapid transmission in the community. The virus spreads exponentially, with new cases doubling every 3–5 days. If cases double every five days, new cases will increase from 100 a day to over 6,000 after one month and over 300,000 after two months. With this kind of spread, testing and tracking no longer work, patients overwhelm hospitals and deaths rise rapidly. Countries like Italy, the US and most of Europe are now in this phase, and the Chinese province of Hubei was too during January. 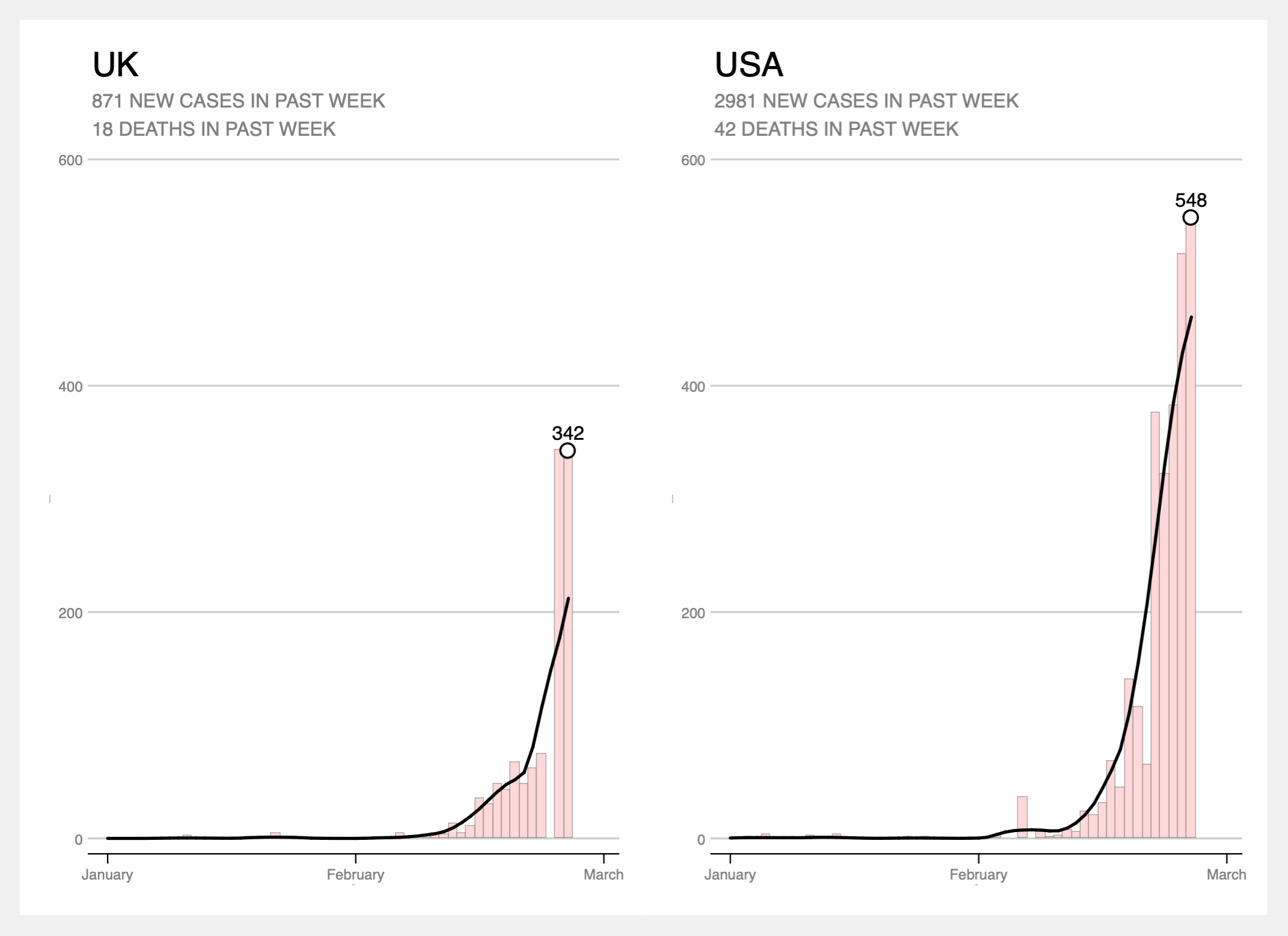 In this explosive phase, only a lock-down of all normal life and confining people inside their homes for many weeks will slow the spread of the virus enough to get back into the testing-and-tracing phase. If a lock-down is draconian and long enough–but we are talking about months and not weeks–then it can stop the virus dead. This has happened in Hubei, China, where after two months of lock-down, there are almost zero new cases. Korea’s lock-down which targeted specific areas also worked and brought numbers down to a controllable level. 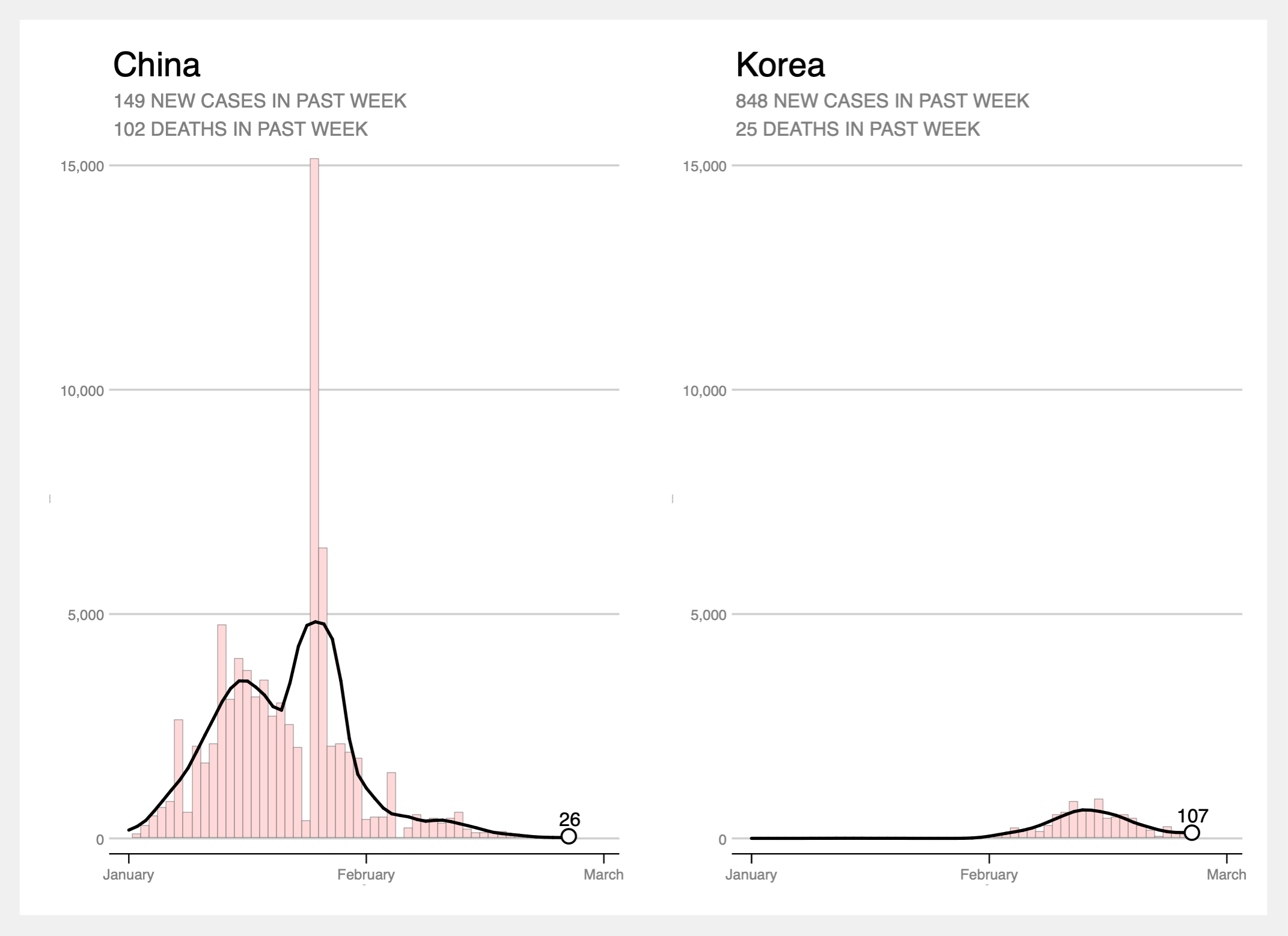 We have learnt in the past few weeks that lockdowns are inevitable when any country enters the explosive phase. Lockdowns cause huge social and economic disruption. Most governments fearing this have stalled thinking the costs are too great. Some have toyed with the idea of riding out the epidemic in hope of building enough immunity to protect against future waves of the virus. But they have all given in when confronting the reality of overwhelmed hospitals and rising deaths. In the UK, this required British leaders to be told that an unrestrained epidemic would kill more British people in one year than those who died in World War II. The only difference between China and Western governments in this respect is that Western governments have been willing to let more of their citizens die than Beijing before deciding to take tough action to protect their people.

Since all governments are forced eventually to impose draconian measures, the explosive phase ends up infecting only 3% at most of the population. This means that 97% of the population continues to lack immunity, so the virus is just as able to spread rapidly as before the lockdowns. When control measures are lifted in either phase and the virus is either not completely eradicated or is re-introduced from outside, the virus will restart the epidemic just as ferociously as before. This means that unless the whole world eradicates COVID-19 at the same time, we face multiple waves of infection during the next year, each lasting two to three months. This will continue until we have an effective vaccine.

We are now in the second global wave of infection. The first wave was seeded by travellers who left China in January and early February before travel restrictions stopped most travel out of China. Several places successfully suppressed this first wave through a mix of aggressive testing and isolation (Singapore, Taiwan, Hong Kong), lockdowns (in case of China) and travel restrictions (most important in Sri Lanka’s case). Unfortunately, delays in action by other countries led to major outbreaks in Europe, Iran and elsewhere, and these countries have since seeded a second global wave of infection.

This second wave has exported many more cases of the virus to the world than the first Chinese wave. Because countries that suppressed the first wave then failed to stop European travellers, they have all ended up with a second bigger wave of infections–this includes China, Singapore, Taiwan and Sri Lanka, where almost all recent cases have been imported. This has forced these countries one by one to close their borders to international arrivals– Sri Lanka, Singapore and now even China.

This leaves us in a very grim situation into 2021. In the US, Europe and most other major economies, it may be too late to eradicate the virus within their borders. Infection rates in these countries are now many times higher than they ever reached in China. If these countries imposed even more draconian restrictions on life and travel than they are already doing and maintained these for 2–3 months plus completely shut their borders, they might be able to replicate China’s initial success. But when the so-called leader of the free world, President Donald Trump, still believes that the US can get back to normal business within a couple of months, I think this is an unlikely prospect.

It is certain that lakhs or millions of people around the world will continue to carry the virus throughout this year. This means that countries like Singapore, Korea, Viet Nam and even Sri Lanka, which have minimal community transmission and have stayed in the testing-and-tracing phase, will not be able to open their borders without risking new waves of infection, leading again to border closures and lockdowns. As for countries like the US and Europe, their most recent measures will suppress the virus sufficiently for them to lift lockdowns, but they are likely to face repeated waves of infection sparked by the virus that will continue to circulate within their borders.

This combination of the necessity for repeated lockdowns in major economies and the stop to most international travel makes a severe global recession unavoidable. Probably the worst since the 1930s. As an aside, economists and official agencies have been in continuous denial about this prospect – economic forecasters continue to be slow to accept that the economy globally and in most countries will contract in 2020.

What can we do?

In this scenario, the best we can hope for is to aim for some level of semi-normalcy consistent with sharply reduced global trade and travel, until such time that the world has an effective vaccine.

Initially, we need to keep our borders shut to prevent importation of new cases and track down every case of infection to make the country virus-free. We are currently doing this, although tracing could be improved by more testing.

If we reach zero cases, we could then gradually lift lockdowns, allow most normal life, including opening schools, and open up our borders under tight restrictions. This will require us to have an aggressive testing and isolation strategy that can minimise importation of the virus, maintains a constant surveillance of the population, and can rapidly suppress the virus if it comes in again to avoid imposing lockdowns. The experience of Singapore, Taiwan and China indicates that this is feasible.

If we do this, we may be able to fare better than many other countries, and we may even be able to grow our economy this year, although paradoxically that may require focusing on trade with China and other Asian economies free of the virus.

Note: This is an updated version of the article published by Sunday Times today (29 March 2020), with slight edits to the title, text and graphics, and adding links to relevant references. My thanks also to the IHP team who work on maintaining our database of Covid-19 data.