Our graphical vizualisation of the Epidemiology Unit’s data on Covid-19 cases in Sri Lanka attracted attention in India, and I was interviewed by The Hindu, whose article appears here. As an aside, foreign journalists have contacted me often than ones here (although one local reporter did talk to me at length whilst I was writing this), which makes me wonder if there is some reluctance to publish analysis which may be critical of the official narrative…

I think that assertion is wrong because if there was limited local transmission in India it is statistically highly unlikely that at least one Indian visitor to Sri Lanka just happened to be infected, and that three Sri Lankans, whom I am guessing had been living in India for some time, were also infected. The most plausible explanation I have in the absence of any other data is that all four acquired the infection through community transmission in India. Further adding to my suspicion is that the rate of increase in new cases in India is now exponential compared with the trend in Sri Lanka. Chart below is the trends in new cases until 24 March. 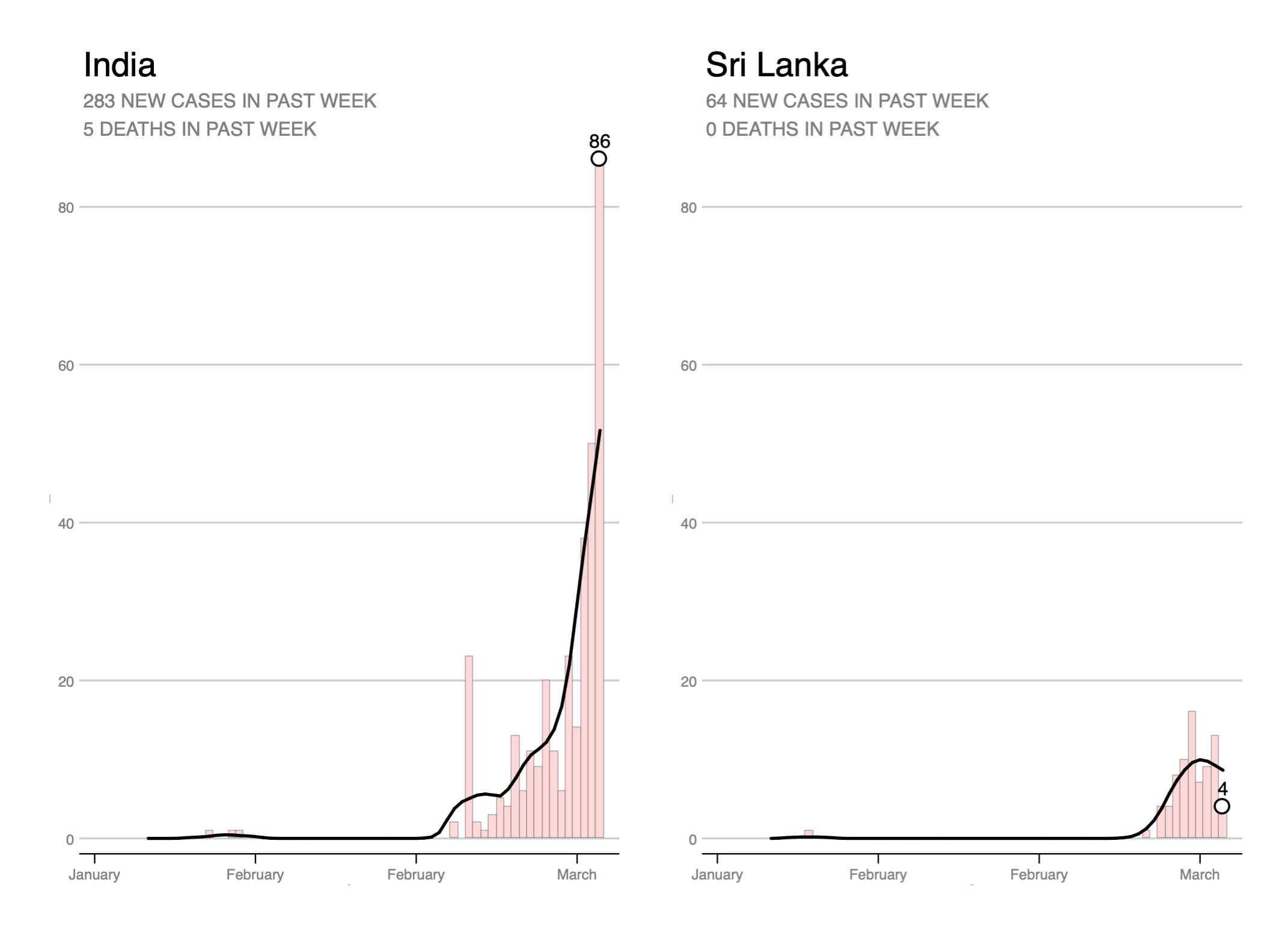 To be fair our own Director-General of Health Services has also been quoted as saying there is no community transmission in Sri Lanka, but the Epidemiology Unit’s own published data identify several cases where the infection source is unknown and has not been connected to foreign arrivals, plus others where the infection was acquired in Sri Lanka from international arrivals.

What’s going on? I think the problem relates to limited testing in India (and also Sri Lanka). The same article cites a senior Indian official as saying that central agencies “had indicated that no community transmission had been found so far.” This is actually a non-denial and an interesting choice of words. What it really means is that India has not yet obtained any positive test samples from people who acquired the infection locally, but that doesn’t mean that these people don’t exist–they simply haven’t been tested. If you take into account that the rate of testing in India is even lower than in Sri Lanka and that India almost certainly has tried to restrict initial testing to those with a history of foreign travel, it is entirely to be expected that any local transmission remains undetected for now. The chart below is one I posted earlier in another post.

The key message is that every country, and that includes Sri Lanka, needs to test, test and  test aggressively to pick up local transmission and control this epidemic. In the case of Singapore which does do this, I’ve been told that only 1% of their tests throws up a positive result, compared with around 10% in Sri Lanka. At least for us, this suggests that we ought to be testing ten times as many people as we are now.