Sri Lanka has still to start releasing daily details of its Covid-19 cases and the findings of the critically important contact tracing effort, as does Singapore and Hong Kong. See here, here and here for how Singapore’s health ministry keeps Singaporeans informed. This is unfortunate as doing so would help build public confidence and understanding of the difficult measures that are needed, as well as help to combat rumour and fake news. Doubly unfortunate, because greater transparency would probably reflect well on the efforts of the Epidemiology Unit of the Ministry of Health.

On the positive side, the Health Promotion Bureau has been innovative in its decision to publish a regularly updated data feed on overall numbers, and in the past few days the Epidemiology Unit has released online details of cases to date. Based on that initial release, which I really hope is updated daily, our team at IHP – Nilmini Wijemunige, Yasodhara Kapuge, Chathurani Sigera and Nishani Gunawardana– generated the graphic below summarising what we know about the first 78 cases (as of 22 March). 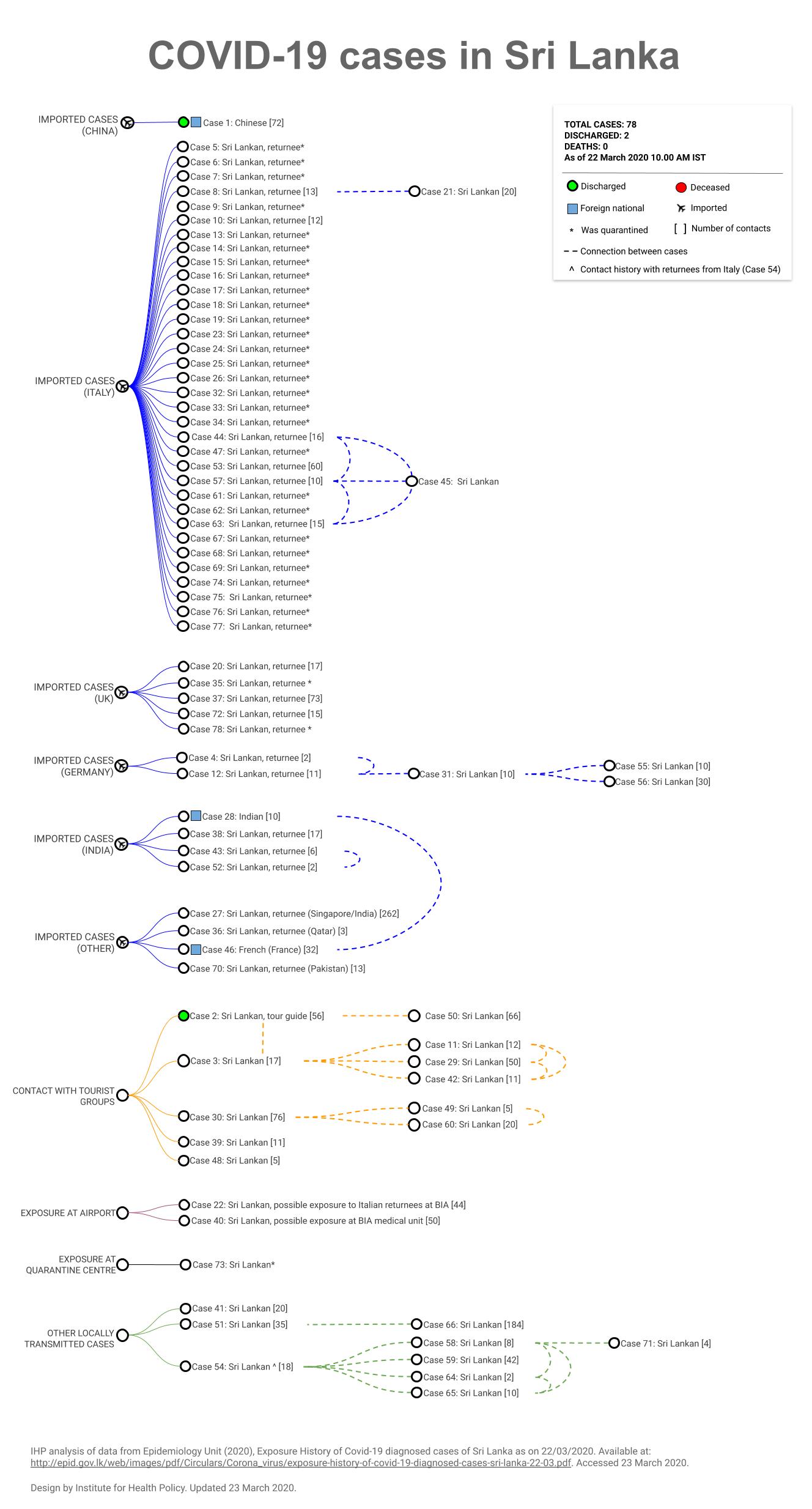 The most important thing that this shows is that Covid-19 remains still largely an infection acquired outside Sri Lanka. Only three cases (4%) have been detected in foreigners visiting Sri Lanka (one each from China, India and UK), and the bulk is accounted for by 52 Sri Lankans (67% of the total) who acquired the infection abroad, plus 14 other Sri Lankans (18%) who were infected by tourists and other arrivals. Only 9 (12%) cases are currently classified as local clusters, indicating a potential weakness in current testing and contact tracing efforts to identify the ultimate link back to a foreign arrival.

Of the cases linked to foreign arrivals, only one –the very first case back in January–has any connection with China. The fact that many Sri Lankans continue to think that Chinese visitors are an infection risk, despite the fact that infection risk is now much lower in China than almost anywhere, demonstrates a significant failure of government efforts to inform the public and allay fears.

The bulk of our imported cases are in fact sourced from Europe, particularly Italy (36 cases or 46% of total cases). As I have previously noted, the failure for two weeks to recognize that arrivals from Italy and the rest of Europe were much more likely to carry the virus than those from China and the consequent failure to impose travel restrictions and mandatory quarantines played a big part in the current outbreak and lockdown.

The four cases linked to India also deserve comment. These consist of one Indian national and three Sri Lankans returnees from India, who were detected in the period 16–19 March. During this same period, the total case count reported by India remained below 200. Such a high incidence in our arrivals from India simply does not fit the reported Indian case numbers. It strongly suggests to me that there has been a large undetected outbreak in India since at least early March, and that the Indian authorities are failing to detect most of their cases. Going forward, I would recommend that the authorities treat India as a high risk country when opening the airport to arrivals again.

If we assume that MOH is doing a good job at detecting local cases (something I increasingly have concerns about given the lack of widespread testing), the data suggests that we remain largely free of community transmission and we have some hope of getting new cases down to zero whilst our airports are shut.

Three of the cases involve Sri Lankans who appear to be have been infected locally at the airport and in quarantine. This is concerning as it points to lack of effective infection control measures. The airport infections don’t surprise me as I was quite shocked when I last landed at the airport by the crowding and lack of queue controls to manage arrivals who were being checked by the public health inspectors. I hope that the airport authorities are using the current suspension of flights to review and overhaul their operating procedures, including supervision arrangements, to prevent future instances of infection. As for the quarantine cases, it’s hard to comment without having more details on how these infections occurred.